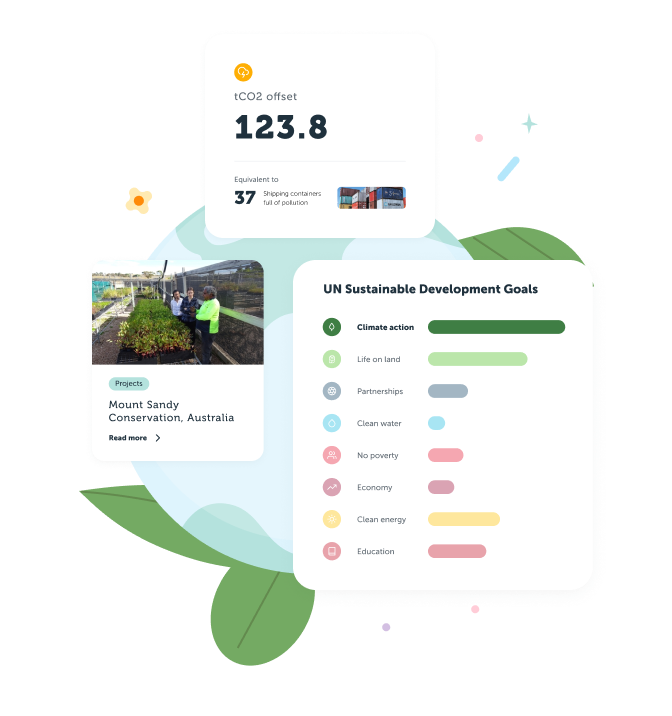 Carbon offsetting refers to reducing an organisation’s greenhouse gas (GHG) emissions by compensating for some of their emissions with carbon reduction or avoidance projects.

Confused? We know this subject can seem complicated, so we’ve broken it down into some of the most frequently asked questions – by the time you’ve read this, you’ll be an expert in carbon offsets!

What is a carbon offset?

A carbon offset is a way for individuals, businesses or countries to compensate for their carbon footprint. Instead of preventing emissions from being released, the company compensates for those emissions by funding projects which reduce, remove or store greenhouse gases from elsewhere in the world. These projects are certified by governments or specialist certification organisations.

Carbon offsetting is not a silver bullet solution to climate change and for this reason can be controversial when used improperly, as it does not prevent the initial emissions from being released into the atmosphere. However, if used alongside a proper carbon reduction plan, offsetting is an effective way of tackling any remaining, unavoidable emissions.

What are carbon credits?

In answer to the question ‘what is a carbon credit?’, you should know that carbon credits and carbon offsets are pretty much the same things. Carbon credits are purchased by a company and used to fund carbon reduction, removal (sequestration) or storage projects.

One carbon credit is equal to the removal or storage of one metric tonne of CO2. The business can ‘retire’ the credit, to use it towards their own emissions goals.

Demand for carbon credits is growing, as more and more companies take responsibility for their emissions and set environmental targets in the face of the climate crisis. This is in line with the Kyoto Protocol and the Paris Agreement. These international treaties legally bind developed countries and economies to reduce their greenhouse gas emissions, in recognition that they are causing climate change.

How does carbon offsetting work?

The first step in carbon offsetting is to measure your GHG emissions. Trace can help you do this in as little as 1 week. You should then look at ways to reduce your emissions by preventing them from being released. This may include actions such as switching to renewable energy, reducing air travel, or encouraging employees to work from home to reduce commuting emissions.

For any unavoidable emissions (or as a temporary measure whilst you make the necessary upgrades to reduce emissions), you can use carbon offsetting. A broker or company such as Trace will purchase carbon credits on your behalf on the voluntary carbon market, equal to or above the amount of carbon emitted by your business.

These credits provide essential funds for carbon offset projects that remove or reduce the amount of carbon in the atmosphere – anything from protecting a mangrove forest, to replacing the cookstoves of people in developing countries with cleaner options. This works because climate change is a non-localised problem – reducing greenhouse gases anywhere in the world helps the climate as a whole.

Once you’ve offset your remaining emissions, you can legitimately claim your business is carbon neutral. If you go through this process with Trace, we will provide you with a ‘Carbon Neutral’ badge that you can display on your website or marketing collateral.

What are some examples of carbon offsets?

There are two main distinctions in carbon offsetting projects: those that remove or sequester carbon from the atmosphere, eg. land preservation, and those that avoid carbon from being released, eg. converting power plants to renewable energy. Carbon offset projects may be primarily nature-based, technology-based or community-based.

Nature-based carbon offsetting can include land preservation and restoration. At Trace, we support a conservation project in the Katingan Peatlands, Indonesia, which involves protecting the largest forest-based carbon store in the world.

This is possible because carbon credits offer a commercially viable alternative to the forest being cleared for lucrative plantations. The project stops 7.5 million tonnes of CO2e (CO2 or an equivalent amount of other greenhouse gases) from being released every year!

Carbon offsetting projects often involve the purchase and provision of technology that supports a switch to renewable clean energy, thus reducing the amount of carbon emitted.

For example, our Siam Cement Biomass project in Thailand involves funding R&D to update the technology in cement production plants. These plants can then be powered by renewable biomass fuels, such as rice husks, instead of fossil fuels. This project stops 600,000 tonnes of CO2 emissions being created each year.

Community-based carbon offset projects are implemented in collaboration with and to the benefit of the local community. They may use nature or technology. For example, our project providing efficient cookstoves to communities in Nepal (which last longer and produce less harmful smoke), improves the health and wellbeing of the community.

Many carbon offset projects also support local communities through the creation of jobs and infrastructure, and investment in education. Our Cool Fire project in Northern Territory, Australia, helps preserve the knowledge of the Aboriginal people, by teaching the community how to use their controlled fires technique.

You’ve made it this far – starting is easy

Join our community of climate-conscious business leaders and take responsibility for your carbon footprint with trace today.
Get startedBook a call

What is the best way to offset carbon?

It’s important to remember that the best way to reduce your company’s GHG emissions is to stop them from being released in the first place. Carbon offsets need to exist in addition to a carbon reduction strategy to be credible – you don’t want to be accused of ‘greenwashing’ (doing it just for show!).For businesses with as-yet unavoidable emissions – such as airlines – carbon offsets can limit their impact on the planet.

It is crucial that the offset is ‘additional’. This means that the development of the carbon offset project and therefore positive impact would not have happened without that investment from the business’s purchase of carbon credits. We can know an offset is additional thanks to external verification from well-respected organisations, such as Gold Standard and VCS.

Of the various ways to offset carbon, those that sequester (remove) carbon directly from the atmosphere, or prevent it from being released – such as moving to renewable energy forms – are generally preferable to those that store it. To limit further global warming and create a sustainable future for us all, we must urgently move away from the burning of natural gas, coal and oil and using storage solutions as an excuse to continue these activities

How much carbon does a tree offset?

Trees are an important tool in the fight against climate change and are incredibly effective at sequestering carbon dioxide. However, it is difficult to determine the exact amount of CO2 they remove.

Trees are also only a temporary carbon store. When the tree dies, carbon dioxide will be re-released back into the atmosphere – and with the adverse weather effects caused by climate change, trees are increasingly vulnerable to this.

Tree planting is not verified as a carbon offset by VCS or Gold Standard, so Trace does not take this into account for our reporting. However, we still plant trees for our members, because we know how great they are!

Why should you offset carbon?

Carbon offsetting has a powerful role to play in tackling the climate crisis. Offsetting can help individuals and businesses of all sizes become carbon neutral. This is the first step of a journey to reach net zero and become climate positive, where you leave a positive trace and give-back to the  environment – the ultimate ambition!

Offsetting now means you’re setting your business up for the future. Reaching net-zero will be easier later down the line if you start early and make current business decisions with your environmental impact in mind.

Achieving carbon neutrality with the help of carbon offsets can also make you stand out from competitors. It’s a way for companies to show their commitment to reducing their carbon footprint and becoming more eco-friendly. This can help to attract both employees and customers, who are increasingly conscious of a company’s ethics.

On a personal and moral level, offsetting carbon is the right thing to do, and will help ensure your children have a liveable planet to grow up in.

Yes! Carbon offsetting is an effective way for individuals and businesses to reduce their net carbon emissions and become carbon neutral. However, it should not be used in place of a carbon reduction program. The goal should always be to reduce the burning of fossil fuels and stop greenhouse gases from being emitted.

Only when 90%+ of emissions are avoided and the rest are offset can your business achieve net-zero. At this stage, you’re well on your way to becoming climate positive and a true friend to the planet.

How do you offset carbon emissions?

Hopefully, you’re now convinced that offsetting your carbon emissions is easy, achievable and worthwhile. For more information, check out our article on how to become carbon neutral, or contact us now to kickstart the process for your business - you won’t regret it!